$600 is not a princely sum for the people who keep this country running.

In college, I once attended a rape prevention class in which the instructor advised women on what they should do if attacked.

What if that doesn't work? one woman asked.

"Kick him in the (private parts) as hard as you can."

What if he keeps chasing you? she asked.

"What kind of men do you know?" the instructor asked incredulously.

That's the question I want to ask politicians who oppose extending coronavirus-related unemployment benefits to people made jobless by Covid-19. Many Republican senators oppose extending $600 weekly payments because, they fear, when added to their regular unemployment payment, some people may actually - for a brief moment - make more from not working than they would from their regular gig.

They would thus, Sen. Tim Scott, R-S.C., said, be "disincentivized" from working.

What kind of men and women do you know, Sen. Tim?

Not the kind I know.

Growing up in Rockingham, I spent waaaaaay too much time hanging out in the poolroom on the "Be-mo" - a one-block business area so named because when you were there, you had to "be mo' careful" lest some sharpie catch you with your guard down. 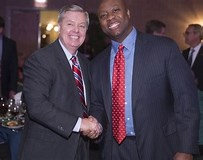 The main poolroom topic of conversation - after women, basketball and baseball - was the jobs these men worked. Many were lint heads from the textile mills, and they'd often show up to shoot pool and the breeze with the lint literally still in their heads.

The names of the mills - Klopman, Aleo, Sandhurst, Beaunit, among others too numerous to remember - recall a time when jobs were so plentiful that you could get one without even getting out of bed. (Trust me: I did.)

Now, most of these were the most unglamorous and - before the 'rona - dangerous jobs imaginable. Don't even get me started on the people who toiled at the local chicken plant, their fingers so gnarled and stiff from pulling craws - don't ask - in a refrigerated building that they could barely hold a pool cue.

Yet, even as they cursed their bosses - a time-honored American tradition - and lamented having to get up early to go meet The Man, there was unmistakable pride in having a job that allowed them to buy homes, feed their families and maybe take a trip "up North" to visit relatives once a year.

When Lindsey Graham declared that he would rather die than provide extra payments of $600 to the jobless beyond July, I thought about William Richardson. I hope his family won't mind me using his full name, but that's the only way we knew him. No one ever called him William except his girlfriend, Mary Ann.

Remember in Lonesome Dove, the greatest Western ever made, when Deets was killed and Capt. Woodrow F. Call carved an epitaph into a wooden cross?

It read, in part, "Cheerful in all weathers."

That was William Richardson. Rain, sleet or snow, he was a human alarm clock waking me up for school too early. My bedroom was right next to the street, and each morning I'd hear him walking with a purpose, hunched against the elements, usually in just a white t-shirt.

A 2019 CNBC/SurveyMonkey survey of American workers found that 85 percent of us were very or somewhat satisfied with our jobs. That describes William Richardson, because he was, astonishingly to me, often whistling jauntily as he hoofed it to his job at the iron foundry.

Sure, some people may be leery of returning to work if they know they're putting their lives in danger - because, say, some selfish jerk claims it's his or her constitutional right to endanger everyone else's health by not wearing a mask when he orders his giant mocha latte - but I have enough confidence in the American worker to think that most of us can't wait to get back to the grind.

The pride those poolroom habitués had in their jobs, even as they badmouthed their bosses, was undeniable. It's impossible to imagine - as Graham and Scott seem to think - that some government sustenance would have made them quit their jobs to lie around gnawing on pickled pig's feet and guzzling malt liquor.

These men and women loved working, loved their jobs, far more than their jobs loved them.

William Richardson is gone now, but there remain millions like him, hard-working Americans made jobless through no fault of their own. I despise Graham, Scott et al for begrudging 30 million workers this temporary lifeline for fear that somebody somewhere might receive a nickel more than they think they should.

"I promise you over our dead bodies will this get reauthorized," Graham said of government aid past July. "We've got to stop this. You cannot turn on the economy until you get this aberration of the law fixed."

I'm no economist, but I'm guessing that neither can one "turn on the economy" if there are no jobs or you're dead.

Give Herschel the ball, y'all. And tell him to stuff it.

Dennis Rogers: He was more than just Elvis and barbecue.